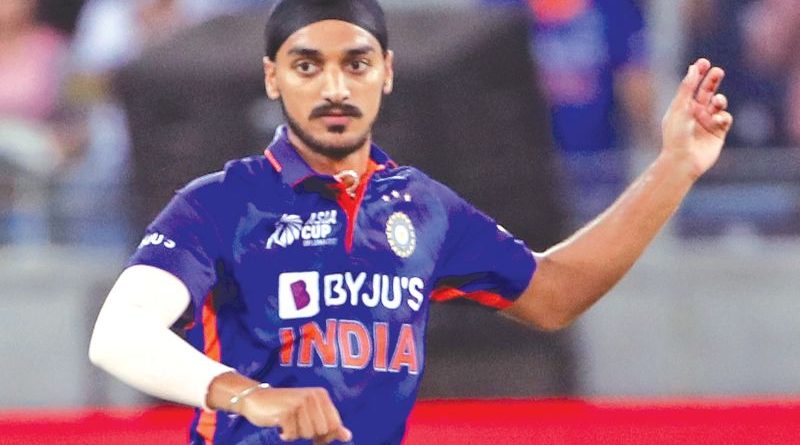 Come let’s know something about Arshdeep Singh Cricketer in this article. Arshdeep Singh was born in Guna in Madhya Pradesh, India on 5 February 1999. Arshdeep Singh a well-known successful cricketer. He is an Indian left -arm medium fast bowler who plays for Punjab in domestic cricket. He came into the limelight in Indian Premier League in season 2021 when he turned out to be as the second-highest wicket-taker in the team. Arshdeep Singh has the ability to bowl accurate Yorkers in the death overs that can trouble many batters to make runs. In TATA IPL 2022, Arshdeep Singh was held on by Punjab Kings though there was a mega auction of IPL.

At the age of 18 years in 2017, Arshdeep Singh was picked up in the team of Punjab for VINNOMankad Trophy and picked 13 wickets in the tournament. In the same year, in Punjab Inter-District and in One Day Tournament, he took 19 wickets. Arshdeep Singh’s mother tells that Arshdeep used to travel on a bicycle every day to reach the cricket academy in Chandigarh.

On 19 September 2018, he was listed as a debut player for Punjab in the Vijay Hazare Trophy. His name was listed in India’s squad for the Cricket World Cup-2018 Under-19 category.

In October 2018, Arshdeep Singh Cricketer was selected in the India Red team for the Under-19 Challenger tournament and took a five-wicket haul during a match.

Arshdeep Singh was picked up in the Under-19 squad of India for the Under-19 ICC Cricket World Cup and played 2 matches in the tournament picking up 3 wickets. India won the Under-19 world Cup that year.

In the same year, he was selected for the Under-23 squad for Punjab and made his debut in the CK NAYDU Trophy tournament. On his debut, Arshdeep picked 8 wickets in the match and led his team to victory single handedly.

Then he was chosen in the Punjab squad for the Vijay Hazare Trophy tournament and created a remarkable debut for the team as he took 2 crucial wickets in the match against Himachal Pradesh.

At his 20th age, as experienced and proud as Arshdeep Singh Cricketer, he sped up to 145 kmph and was appreciated for his skill and believed as the future of Indian Cricket.

Arshdeep was named as one of the five net bowlers for India’s tour of Sri Lanka in June 2021. Arshdeep Singh was included in India’s main squad for his last two Twenty20 International (T201) matches after a positive case for COVID-19 in the Indian team.

Being well-known, this, Arshdeep Singh Cricketer started his Indian Premier League debut in April 2019, as he was roped in by Kings XI Punjab for the season after his exceptional performances in the domestic circuit. In this season, he played 3 matches and took 3 wickets.

In IPL 2020, Arshdeep Singh got more chances and played 8 matches and picked 9 wickets. That time, his economy went down compared to that of his debut season.

But he proved his worth in the season of 2020 IPL for Punjab Kings as he took 9 wickets in 8 matches and with the economy rate of 8.77 which made him a stand-out bowler of the team.

IPL 2021 was the life changing season for Arshdeep Singh as he ended up as the second highest wicket taker for his team in the season. During this tournament, he played 12 matches and had 18 wickets.

Because of this, in the 2021 series against Sri Lanka, he was included as one of the net-blowers in the Indian squad. He was also picked up in the Indian squad for the 2 matches against Sri Lanka but didn’t get a chance to appear in In TATA IPL 2022, Arshdeep Singh was retained by Punjab Kings ahead of the mega auction of IPL for a whopping amount of 4 crores. During this tournament, he played 14 matches and had 10 wickets.

Arshdeep Singh born in 1999 and his parents are Darshan Singh and Baljit Kaur. His father works in DCM as a Chief Security Officer and his mother, a homemaker. His family includes two siblings also Arshdeep Singh has an elder brother who lives in Canada.

Arshdeep earns a good price for playing in the IPL. He plays for Punjab Kings and was given Rs 4 crore to play IPL in 2022. The record of the last few years has been given below:

Food Health How To Lifestyle